In memory of our friend 'The Admiral' Rony Bridges 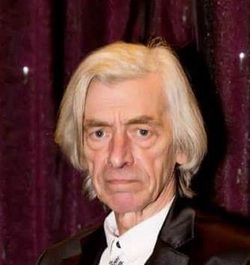 
Rony has appeared in many TV dramas and films over the past 15 years. Latterly he has appeared in STAR WARS V11 alongside Gwendoline Christie (Captain Phasma) Rony said, “It was the most amazing experience being part of it.  When I walked on set, J.J Abrams called out, “We have the new Peter Cushing” Rony replied, “I wish.”

Rony played the character Magnus in Valhalla Rising, directed by Nicholas Winding Refn. Rony said, “It was a harrowing ten weeks in the Scottish Highlands until I was finally killed off by Mads Mikkelson.”

Rony has also featured in a number of music videos, namely Florence + the Machine, where he played Florence’s father in the epic award winning video, Queen of Peace and Long and Lost. In real life, Rony bares a striking resemblance to Florence’s real father.

His most recent role has been as a clan chief in the hit American TV series, Outlander.

To top it all, Rony has also written his own plays. His critically acclaimed, Six and a Tanner was performed by the award winning actor, David Hayman. Rony was also the writer in residence at the notorious Barlinnie Prison in Glasgow. Subsequently he directed a short film that he helped to write along with some inmates, some of whom were lifers. The film went on to win the prestigious Roger Graef Platinum award.