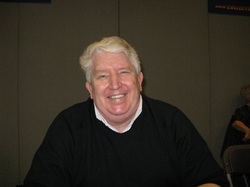 Chris is very proud of the fact that he was born on the South Side of Chicago in 1942. He attended Hyde Park High School, where one of his classmates was a nephew of Al Capone. He joined The Second City as a Theatrical Apprentice in 1960, before moving to Berkeley and the University of California where he received his degree in Dramatic Art, In 1967, he moved to London to attend the Webber-Douglas Academy of Dramatic Art. Having met and been tutored by Steven Berkoff , he joined Mr Berkoff and co-founded the London Theatre Group in 1970, helping to produce the original productions of Kafka’s Metamorphosis and Macbeth as well as assisting in the direction at the RADA of Agamemnon with Jonathan Price in the title roll.

Chris has appeared in the West End in Lenny, The Unknown Soldier and his Wife, Pal Joey and other productions as well as starring in many productions on BBC Radio. By far the bulk of his work during the 70’s and 80’s was in Television and Film where, as a jobbing American actor, he played a wide variety of roles in many of the iconic films of that era including Saturn 3, D.A.R.Y.L., Reds, Star Wars ( portraying the role of Captain Khurgee ) and The Spy Who Loved Me. After his final performance in The Nightmare Years, a seven part series for Turner Television, with Sam Waterston, Chris retired as an actor and concentrated on raising his family and became a Primary school teacher in Hertfordshire in the UK and after teaching for over 20 years, finally retired altogether in 2007. Since then, he has been delighted to have the opportunity to meet and greet fans of the films in which he has appeared and to share with them some of the experiences he had while working with some of the most famous stars of the era.


Here are two great interviews that were conducted with Chris . One with Frank Rich through Wattographs Recollections which you can see HERE and the other by Dennis Pellegrom of Star Wars Interviews that you can read by following this LINK .