In loving memory of our good friend Alan Harris 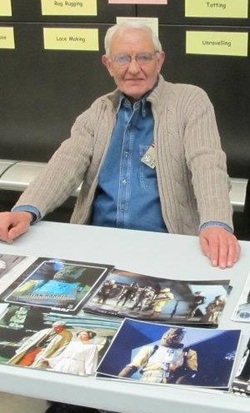 
This is a list of some of the characters and work Alan did in the Star Wars Saga : ' Star Wars - The Phantom Menace ' ( Stood in and body doubled for Terence Stamp )  ' Star War's- A New Hope ' ( Princess Leia's escort ) . ' Star War's - The Empire Strikes Back ' ( He was fitted for the original prototype Boba Fett costume which was completely white, his body was used to cast the Han in Carbonite module and Harrison Ford's face was added to it, he stood in for Anthony Daniels as C-3p0 for four months during filming , portrayed the Bespin guard ' Merril ', also played a stormtrooper and portrayed the bounty hunter ' Bossk ' which he is most famous for ). ' Star Wars - Return of the Jedi ' ( Anthony Daniel's stand in as C-3p0 ) .


Alan has also worked on TV and can be seen in quite a few episodes of the cult favourite sci-fi show ' Space -1999 ' .


To see Alan's filmography you can visit his IMDB page by following this LINK .


You can read a great online interview conducted with Alan by Star Wars Interviews by following this LINK .


Here is a video interview that was conducted with him at the 2010 Dallas Comic Con and you can check that out by going HERE .