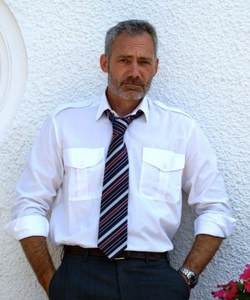 Mark was born in the early 60s in a small village in Kent, where at an early age was subjected to Hollywood films and musicals by his mother.

At the age of 15 he started dancing at the local clubs and soon discovered he had an ability to win competitions. This made him want to go into performing arts but by the age of 21 he had a wife and his first child so he joined his wife's family retail business. 13 years later he decided to peruse his passion for acting.

In the mid 1990s he did a full time two year drama course and passed with distinction. Since leaving college his portfolio consists of theatre performances from Kenickie in Grease to Oberon/Theseus in a midsummer nights dream and many more. Several corporate films. Voiceovers for documentaries, one about heavy metal in Finland and another about the Baltic Sea.
Since then he has been in several film and TV roles, like Spectre, Call the Midwife, Unforgotten, The Tunnel. His roles so far have be varied and exciting.

Mark is a family man with three children and two grandchildren and is a regular face at the local gym. Keeping fit is very important to Mark and he has been going to the gym since he was 25.

Mark lives with his partner of 7 years. He has a dog, chickens, ducks and two grumpy geese on his river which runs through the garden.


If you would like to have Mark as a guest signer at your convention please fill out the contact form below and Mark will be in touch with you very soon .